Known by several names like louvred shutters or California shutters, these interior window coverings are mainly called plantation shutters because they’re a common choice for home owners living in tropical regions. Traditionally, they’re made of wood, but modern designs have used glass-reinforced plastic, fabric inserts, aluminium, and tinted glass to make the shutters more durable during heavy storms and windy days. These shutters are arranged in a long vertical stack or in two or three tiers. They can be turned up or down to close and open them completely or halfway.

Decorating your living room, bedroom or covered patio with plantation shutters adds a tropical feel to the interiors. Some people hang long sheer curtains over them to screen the sunlight and blowing breeze, but they look good enough as they are. In some instances, the shutters made of wood retain their natural grain and end up with only a varnish and a little termite treatment. Other shutters receive more attention with the quality of louvres used.

Bottom and top tiers may remain closed while the middle tiers let the air circulate and cool down the house during summer. When all the shutters are closed while a heavy rain pours, the house remains dry. They also block the wind from spraying the room with moisture as it bangs against the slats. Because they’re airtight window coverings, these plantation shutters also protect the room’s occupants from absorbing too much of those cancer-causing UV rays in sunlight. They also muffle those sounds coming from outside or inside the room and keep the home owner’s privacy intact.

There’s another advantage to using plantation shutters other than their aesthetically pleasing appearance and their effectiveness in keeping out sunlight, heat and wind. Modern designs offer two-way locking systems to keep the shutters secure from break-ins and home invasions. This is especially useful when hurricanes come crashing in and the interlocking louvres don’t blow inward so easily against a force of nature. If they can withstand the wrath of Mother Nature, then they can protect you and the ones you love from criminal elements.

Interested in re-decorating your home with plantation shutters? Contact Australia’s top online shutter store now for a quick quote and other inquiries.

Read our other blogs about Plantation Shutters: 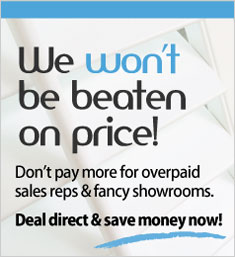